Dan Nickrent, one of our Emeritus Plant Biologist who specializes in Plant Molecular Systematics and Evolution recently published a paper in the American Journal of Botany.

Interview with PLB's Dr. Sedonia Sipes, published in the Daily Egyptian, on concerns about the ongoing Thompson Woods/Campus Lake survey in which understory and vegetation were defined explicitly as "annual and perennial weeds and grasses".

The Goldwater scholarship is considered the premier nationally competitive undergraduate scholarship award for Mathematics, Natural Science, and Engineering majors. Out of the 1150 nominations received for the 2016 competition, 252 Scholars were named and 256 Honorable Mentions were awarded. 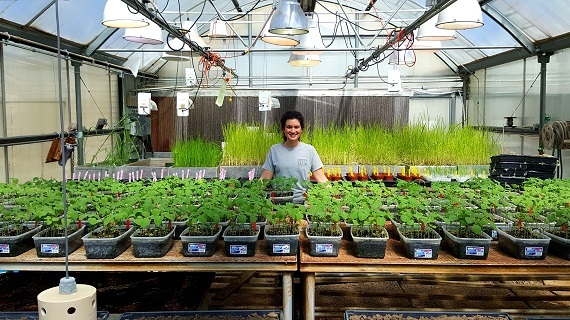 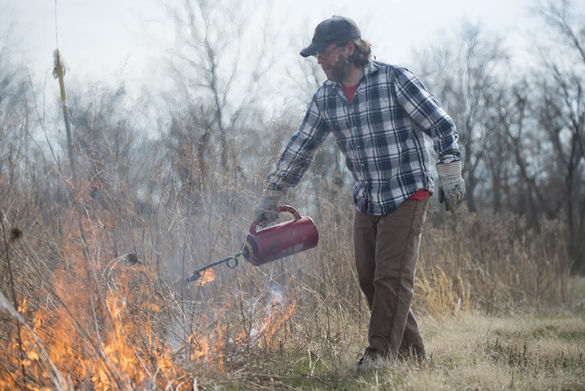 Ph.D. Candidate George Manning was featured on the front page of the Daily Egyptian performing a controlled burn at a school-owned prairie plot on campus. 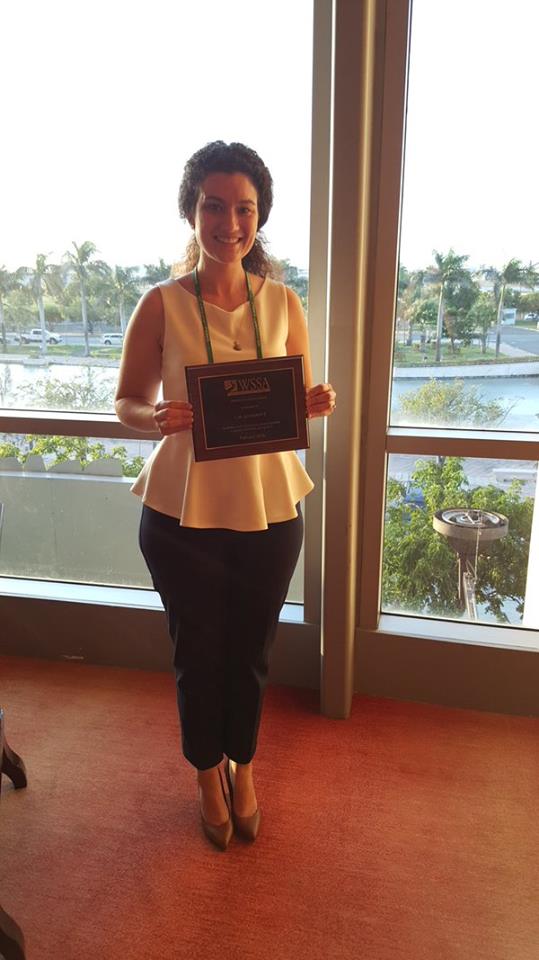 Did you know...the Plant Biology program recently launched an undergraduate specialization in conservation and protection of biodiversity.  The specialization will focus on major challenges facing humanity and help fill a predicted shortage of trained botanists and other biologists with botanical experience. 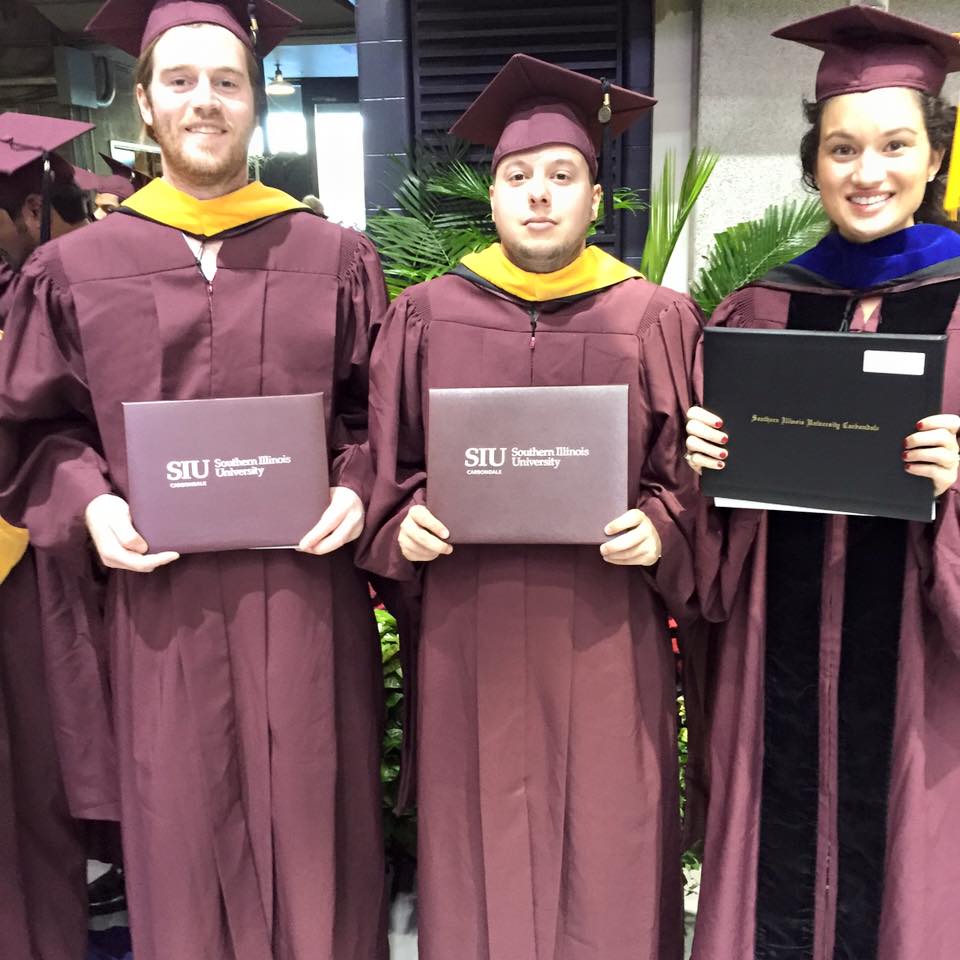 Congratulations to our most recent Plant Biology Graduates: (L-R): Bryan Piatkowski & Drew Scott, who graduated with their M.S. degrees, and Dr. Lauren Schwartz who graduated with her Ph.D.  These students participated in the Fall 2015 Commencement Exercises held on Saturday, December 19th, 2015.

The EPA fire project being conducted by the Battaglia lab and collaborators at University of Alabama and Grand Bay National Estuarine Research Reserve made the Corpus Christi, Texas news.

The Robert Noyce Master Teaching Fellowship, started by one of our own, Dr. Karen Renzaglia, was featured in the November/December edition of the Friends of the Cache River Watershed newsletter.  Read more about this program that is designed to transform the way teachers engage elementary and middle school students in science and math, as told by Noyce Project Manager, and PLB Graduate Student, Travis Neal.

This article features Plant Biology Emeritus Professor, Daniel Nickrent, who participated in a study that was recently published.

The mosaic above was constructed by Daniel Nickrent using EasyMoza software based on a public domain photo of plant earth. 367 images representing 360 introduced, naturalized, or invasive plant species worldwide were used as tiles to construct the mosaic. Congratulations to 2015 REACH Recipient and Plant Biology Undergraduate, Austin Weigle. REACH, or Research Enriched Academic Challenge, is a highly competitive program, open to all disciplines, which offers up to 20 grant awards each year to full-time SIU undergraduate students to work on an independent research project with a faculty member. For more information, visit REACH's website.

Austin will be looking into gene expression in order to determine where certain isomers of tryptophan synthase occur in the indigo‐producing plant Isatis tinctoria, commonly known as dyer's woad. Indigo producing plants manufacture indigo dye as well as pink dye, known as indirubin, along the metabolic pathway for tryptophan synthesis. While indigo has exhibited carcinogenic character, indirubin has been shown to prevent the growth of and development of cancerous cells, as discussed in Traditional Chinese Medicine. This project aims to provide clarity to the tryptophan pathway in relation to where synthesis of indigo and indirubin are located within Isatis tinctoria to serve medicinal and commercial purposes, as well as to support future studies on the tryptophan synthase enzyme at a molecular level.

Another milestone has been reached regarding PhytoImages, the photographic database maintained by Dan Nickrent in the Plant Biology program.  Image number 100,000 was uploaded to the server which was a photo of Nepenthes barcelonae (see above), an insectivorous pitcher plant from the Philippines.  This plant is named for Dr. Julie Barcelona, a scientist in New Zealand who has studied the Philippine flora her entire career. PhytoImages is the repository for 45,000 photos from the Philippines, all of which are linked to Co’s Digital Flora of the Philippines, a continuously updated digital checklist of Philippine vascular plants. The rate of increase in photos uploaded to PhytoImages can be appreciated by noting that image number 20,000 was uploaded October 2010. PhytoImages will also be the repository of all the photos for the soon to be released Illinois Plants website. This elite group of seven includes two Plant Biology faculty members: Dr. Karen Renzaglia, who is being recognized for the Scholar Excellence Award, which earns her the permanent title of Distinguished Scholar. Also, Dr. Sara Baer, who is being named for the Women of Distinction Excellence Award.  The awards will be presented on Monday, April 27th, 2015 at 3PM in Morris Library's Hall of Presidents and Chancellors.  Please join us in congratulating these hard-working women. The Plant Biology greenhouse is to undergo major renovations, a process that is slated to begin in July and last approximately 6 months. Renovations include interior and exterior renovations, including automated temperature and moisture control, as well as making sure the building is compliant with the Americans with Disabilities Act. Visit the Greenhouse Renovation page for more information.

Lauren Schwartz, Ph.D. Candidate in the Plant Biology program was one of 22 students accepted to attend a specialized workshop at the Max-Planck Institute for Demographic Research in Rostock, Germany.