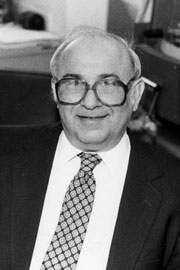 Donald Ugent was born December 20, 1933 in Chicago to Jacob and Rose Ugent, although he grew up in Milwaukee Wisconsin.  He received B.S. degree in 1956, his M.S. degree in 1961 and his Ph.D. in 1966, all from the University of Wisconsin-Madison.  He married Vivian Balkansky on July 15, 1962.  In 1968 he took his accepted an Assistant Professor position at Southern Illinois University in the Botany Department.  In 1973 he was promoted to Associate professor and in 1982 advanced the rank of Professor.  His field of research was ethnobotany, that is, the study of plants used by humans.  Specifically, he was an authority on economic botany and taxonomy of potatoes, particularly archaeological potato specimens from the Andes of South America. He was editor for the Journal of Economic Botany for many years and founder and editor of the online journal Ethno-botanical Leaflets.

Obituary from The Southern Illinoisan HERE